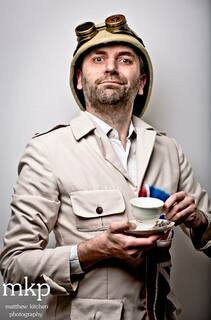 An award winning hip hop artist and accomplished host, the Professor has performed all over the world at everything from festivals to wedding parties, hip hop shows to bizarre burlesque. A regular on the worldwide convention and festival scene he has played everywhere from Canada to Cambodia.
With a career spanning a decade, Professor Elemental first got noticed with  ‘Cup Of Brown Joy’ which notched up over two million views and headlines in the national press. This was soon followed by a scuffle with another rapper named Mr B, resulting in the  follow up ‘Fighting Trousers’; which has been viewed over three million times and  gained worldwide acclaim.
On stage the Professor is a wild combination of music and comedy, incorporating  improvisation and  new material for each live show.

The Ominous Folk of Hopeless Maine 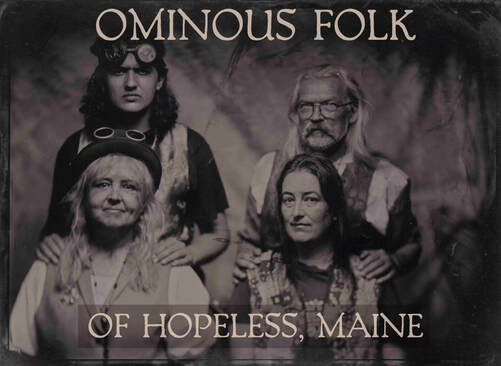 Based on the graphic novels the Ominous Folk take you on a journey through the weird and wonderful world of Hopeless Maine through song, rhyme and story created by Tom and Nimue Brown. A new experience and an ominous one! 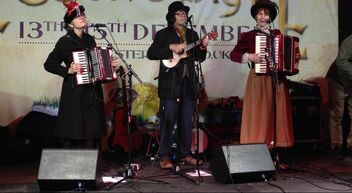 On accordions, fiddle, guitar, banjo and ukulele, Way Out West play and sing all the old songs – some going back as far as the 1960s.  Discover the country roots of the Pet Shop Boys, the folk origins of Rizzle Kicks and The Cure, the big band swing tendencies of David Bowie, then thrill to the biggest secret of all; what Ultravox sounded like when Julie Andrews was still in the line-up.

Ten years ago they were all in a blues band. During the quiet bits on practice nights they discovered a shared secret interest in trashy pop and the rot set in. They’ve supported Three Daft Monkeys and The Wurzels at Gloucester Guildhall, been regulars at Malmesbury Acoustic Sessions and Wychwood Festival. Catch them before they get lynched by Bon Jovi fans.
www.wayoutwest.me.uk