​
Pavillion
10:30-11:30- Mat Mcall -Author of the Steampunk on Mars series that begins with The Dandelion Farmer and continues with The Hourglass Sea, offers us an entertaining and enlightening talk on Victorian ideas of Mars.

11:30-12:30- Dr Geof-Satirist, artist, comics creator, tea lord (With Special Guest, Alexia Clark from Museum in the Park)  Takes full advantage of the museum setting with “Why museums and steampunk go so very well together”. May include actual history.

12:30-1:30 Ian Crichton -"Instruments of Darkness- tools of Herr Döktor's Trade". Steampunk maker and mad scientist extraordinaire lets you peek behind the metaphorical curtain of his laboratory. (or mind, much the same thing, really)

2:30-3:30- Stephen Palmer- Author of the Factory Girl series brings us a talk followed by a question and answer session on the question “ Could an automaton cry”

3:30-4:30-Craig Hallam- Author of the Alan Shaw series will channel the poet Algernon Lear, and recite from his works.
Mr Lear spent much of his youth standing on the street side of glowing windows after being denied admission to various gentleman's clubs and poetry societies around London. His adolescent works were unanimously ridiculed, causing him to leave the city in search of a true muse among nature. This led him across the British Isles in vain and finally to an ill-fated ship heading toward the Americas where Algernon was certain that he would find untapped inspiration. Algernon never arrived on the mainland. When a storm wrecked his ship, Algernon found himself coughing up seawater on the coast of an ominous island. Thus, Algernon Lear found his inspiration in the obscene landscape of Hopeless, Maine.


Bandstand/Courtyard- (to be decided)
1:30-2:30 Tea duelling!
2:30-3:30 Professor Elemental presents one his remarkable workshops in how to create a chap hop work of your. No pencils just imagination needed.
Wristbands will be issued on arrival - there will be limited space for events so please book your place for the events you wish to see on collection of your wristband.
​All attendance will be on a first come first served basis.

Authors/Performers in the daytime programme
​ 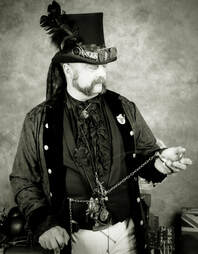 Mat McCall is a fifty-something educationalist specialising in Adult Education, a History and Archaeology lecturer, art tutor and an award winning Steampunk artist. He has been a well known character in the Steampunk community for the last ten years, during which time he created the FB pages Steamcycle, the Steampunk's freecycling page and The Steampunk Community Bookshop, to support Steampunk authors and readers. He is passionately committed to the idea of Steampunk as a familial community. Mat published the first book of his Steampunked Science Fiction book series, The Dandelion Farmer in 2017 and will be publishing the second part this summer. 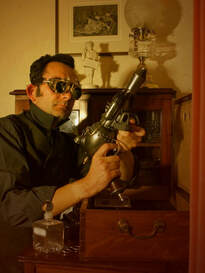 Herr Döktor has been making things his entire life, and has been actively mistaken for an 'Artist' for the last ten years.
From an early age he was fascinated by science of all disciplines, and aesthetics of all kinds, allowing him to hop about time and space and style.
He has exhibited in such prestigious environs as the History of Science Museum in Oxford, alongside the Chapman Brothers and Grayson Perry in the Guildhall Museum in London, and was one of six Steampunk artists invited to 'answer' the Longitude Problem and celebrate the three hundredth anniversary of the start of the Longitude Act for the Royal Observatory, Greenwich; most recently, prints of his work have been exhibited at the 'ODD BEAUTY: The Techno-Eccentric World of Steampunk' at the Southampton Gallery, New York.

​Keith is the creator of the Burnt Watcher novels described by readers as "a neo-medieval post holocaust future where things are both very familiar and very, very different." and "Amazing job! Definitely a must read".
Keith describes himself as a writer of incomplete short stories RPG scenarios and multiple novels.
Keith started playing Role Playing Games in 1978. Yes, he really is that old.
With many years of running and writing scenarios for Call of Cthulhu, Runequest and Paranoia he has finally settled down and written a game based on Tom and Nimue Brown's Hopeless, Maine graphic novels.
Keith will happily chat about coffee, tea, games and music. He hates writing about himself in the third person.

Stephen Palmer is the author of sixteen novels: . In 2016, Infinity Plus published his alternate-world, steampunk Factory Girl trilogy: The Girl With Two Souls / The Girl With One Friend / The Girl With No Soul. In 2018 IP published Tommy Catkins, then in 2019 a return to SF and themes of AI and algorithms The Autist. In 2019 IP also published The Conscientious Objector, set in the Factory Girl world. His short stories have been published by Spectrum, Wildside, NewCon, Unspoken Water, Mutation Press, Solaris, Theakers, Eibonvale, Dog Horn, Manchester Speculative Fiction and elsewhere. In 2019, Newcon Press published his first collection of short stories, the Memory Seed-themed Tales From The Spired Inn. Stephen lives and works in Shropshire, UK

Craig Hallam is an author whose works span all corners of Fantasy, Scifi, Steampunk and Horror.
Since his debut in the British Fantasy Society journal in 2008, his tales have nestled twixt the pages of magazines and anthologies the world over. His Gothic Fantasy novel, Greaveburn, Steampunk trilogy, The Adventures of Alan Shaw, and the dark short stories of Not Before Bed have filled the imaginations of geeks, niche and alternative readers with their character-driven style and unusual plots.
Taking a brief break from fiction in 2017, Craig chronicled his experiences of living with depression and anxiety on DownDays.org, a blog which is currently followed by thousands of people across the globe. Now back in the fiction saddle, he’s completed a pair of novellas exploring two very different futures of humanity. He’s also working on completing Alan Shaw’s trilogy of adventures.
Embrace the Weird!
​
Find him elsewhere:
Blog: www.craighallam.wordpress.com
Twitter: @craighallam84
Facebook: www.facebook.com/craighallamauthor
Praise for Craig Hallam: 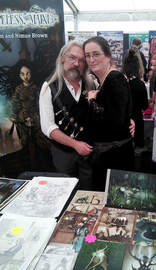 Tom and Nimue Brown share a love of gothic decay, poetry, wild landscapes and strange creatures. They have been collaborating for years, brought together initially by a publishing house. In the summer of 2009 they launched The Hopeless Vendetta – a weekly newspaper charting life on the fictional island of Hopeless. Many new members of the Hopeless, Maine creative family have since joined them there. The Hopeless, Maine graphic novel series is now published by Sloth Comics. The Hopeless, Maine RPG (Travels in Hopeless) is being unleashed on an unsuspecting world as this is written and their tentacles continue to spread... The Browns are collectively influenced by Robert Holdstock, Lord Dunsany, the pre-Raphelites, folklore, the modern Druid tradition, Steampunk and things gothic and gaslit. Both have worked separately in their respective fields. Tom has created covers for Professor Elemental and Steven Saville (among many others) Nimue writes pagan nonfiction, poetry, songs and fantasy novels.
You can find them at Hopelessmaine.com

Professor Elemental is An award winning hip hop artist and accomplished host, the Professor has performed all over the world at everything from festivals to wedding parties, hip hop shows to bizarre burlesque. A regular on the worldwide convention and festival scene he has played everywhere from Canada to Cambodia.

With a career spanning a decade, Professor Elemental first got noticed with  ‘Cup Of Brown Joy’ which notched up over two million views and headlines in the national press. This was soon followed by a scuffle with another rapper named Mr B, resulting in the  follow up ‘Fighting Trousers’; which has been viewed over three million times and  gained worldwide acclaim.
​For the day programme he will be running a special workshop to teach everyone how to "chap hop"
​
www.professorelemental.com